This week saw the annual competition of Lent Bumps occur in Cambridge, with 31 colleges competing in a unique rowing race spread over 5 days where the aim is to try and ‘bump’ the boat racing ahead of you. Normally events this far from home are not relevant to Dover, but this year I, a Dover rower, joined Gonville and Caius college (studying computer science), and have been rowing in the 3 seat of the Caius mens first boat.

The races started on Tuesday with a rest day for the M1 and W1 divisions, with just lower division boats racing. I headed down the river by bike to watch some of the races, to get a feel of how each race is started. A cannon is used to signal 4 minutes to go, 1 minute to go, and the start itself, which is very loud and apparently deafens boats near it. It certainly is effective at getting the adrenaline pumping though! Caius M3 were awarded a technical row-over after a bump in front of them caused some chaos, Caius M2 achieved a row-over, however the women’s side did not fare as well: Caius W2 were bumped by Trinity Hall W2. 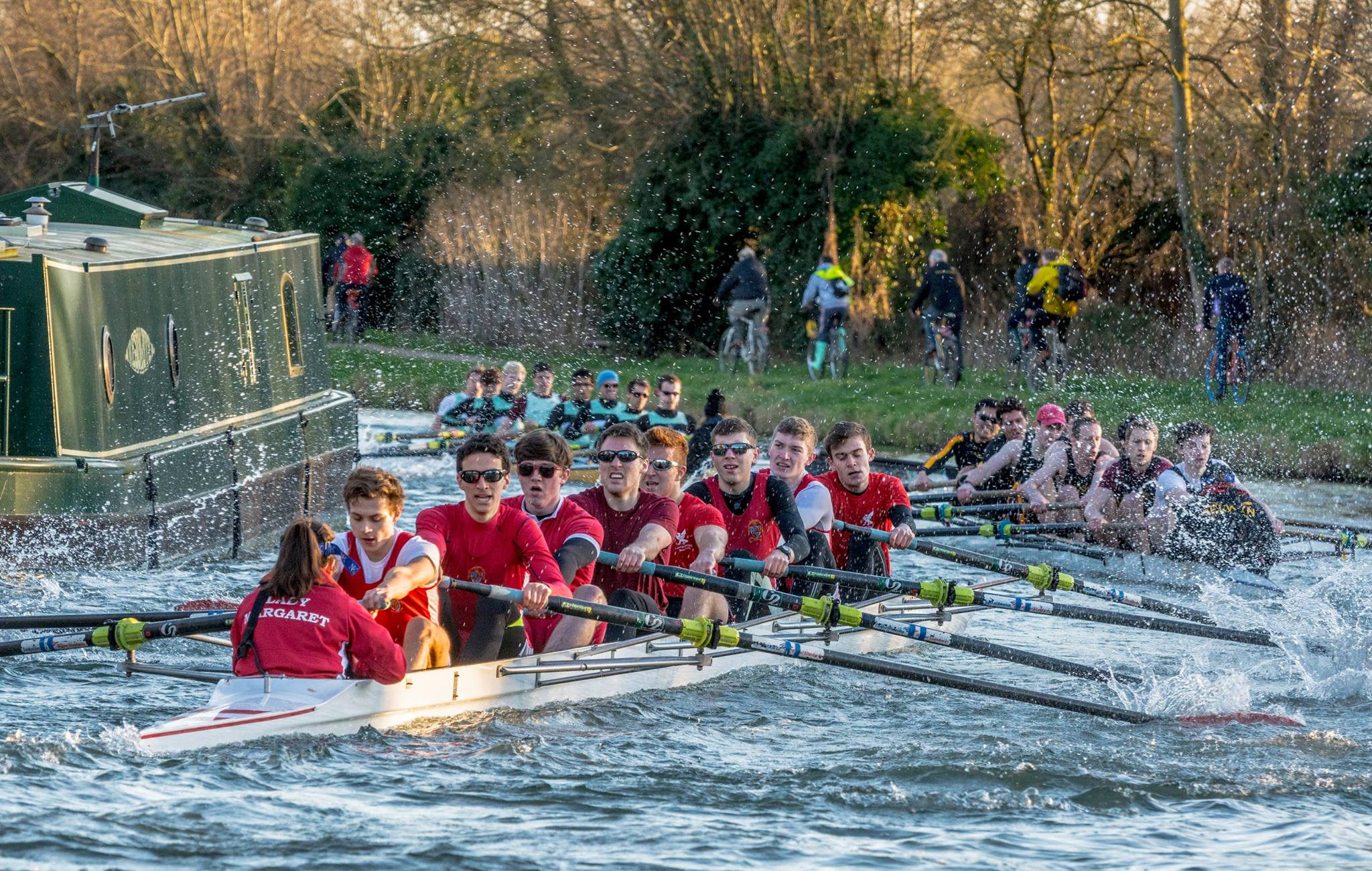 Day 2 was a rest day for the second divisions, and was the first racing day for M1. Caius M3 were bumped by St Edmund’s M2, but in the process were driven into the bank, damaging the boat and injuring the cox. The boat limped back to the boathouses taking on water, however the skilled hands of our boatman fixed the boat back to racing standard by the next day. Caius W2 were again bumped, by Kings W2, and Caius W1 were bumped by Pembroke W1.

The M1 race promised to be very interesting. In a previous race, namely the Robinson Head 2 weeks prior, Caius M1 won with a 3 second lead on the second fastest crew, Downing M1. Downing M1 are also directly behind us in Lent Bumps. Confident that we were the faster crew over the entire course, we just had to contend with any pushes Downing made to stay ahead.

With 4 minutes to go, we huddled together for a final crew chat. We just needed to row like we’d rowed many times before, strong and steady. We got back into the boat – 1 minute gun fires. You can see all the other boats lined up along the bank down the river, past the bridge, down to the lock. As the final 30 second countdown begins, our boatman pushes us out into the river and we sit ready. 10, 9, 8, 7 – square and buried – 6, 5, 4, 3— BOOM. The start is completely unlike coastal rowing, you know exactly when the gun will fire, there’s no faffing with starting lines, and you know that the boat 1.5 lengths behind you will be pushing as hard as they dare to catch you.

Our start is good, and we extend our 1.5 length lead to 2.5 lengths by the half way point, after the 3 corners. Downing now start their push, reclaiming that lost length to take them back on station for the last part of the race, but they cannot sustain the drive, and we row over with 1.5 lengths separation. 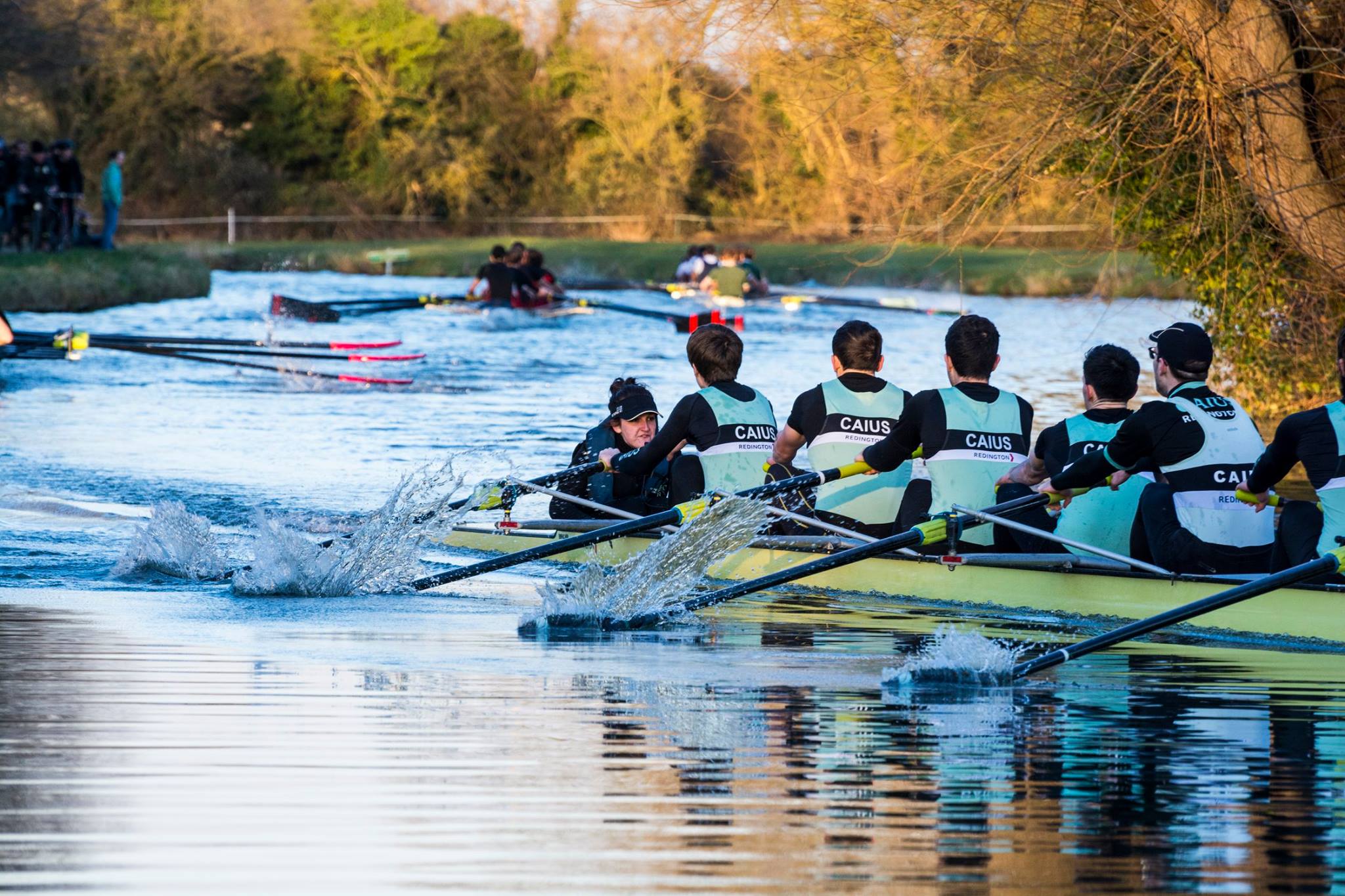 Also of note are the fines and notices given by the race organisers to various crews. In particular: “Sidney Sussex M2 – Excessive greenery – race in a wooden hull fashioned from the branches for the remainder of the week” (crews that get a bump traditionally affix small branches torn from trees and bushes to themselves on the row home).

Caius M3 were unfortunately bumped again by Pembroke M3, Caius M2 had some last-minute subs due to academic commitments, and were bumped by Lady Margaret M2, and Caius W1 were bumped by Churchill W1.

The M1 race began in a similar way to the previous day. We extended a lead of about 3 lengths by the half way point, but as we approached the last 500m Downing put on a push, again finishing 1.5 lengths behind us. There was a highly optimistic whistle from the Downing bank party at this point; usually a single whistle means 1 length separation, 2 whistles means half a length, and 3 whistles means a canvas, but they never got within 1.5 lengths.

In addition, Pembroke M1 (who started 5th at the beginning, and bumped up on day 2 and day 3) were favourites of the local radio station CamFM to bump up to headship. This prompted the race organizers to award a fine: “Cam FM – Over optimistically predicting Pembroke M1 to blade to headship – Attend speed awareness course”

In the M1 division, Downing had Pembroke behind them, who they knew were a fast crew from the bumps of the previous days. They pushed harder off the start, but we still extended our lead to 2 lengths for the majority of the course, finishing with 2 lengths distance. The consecutive days racing was really starting to hurt in all the crews. 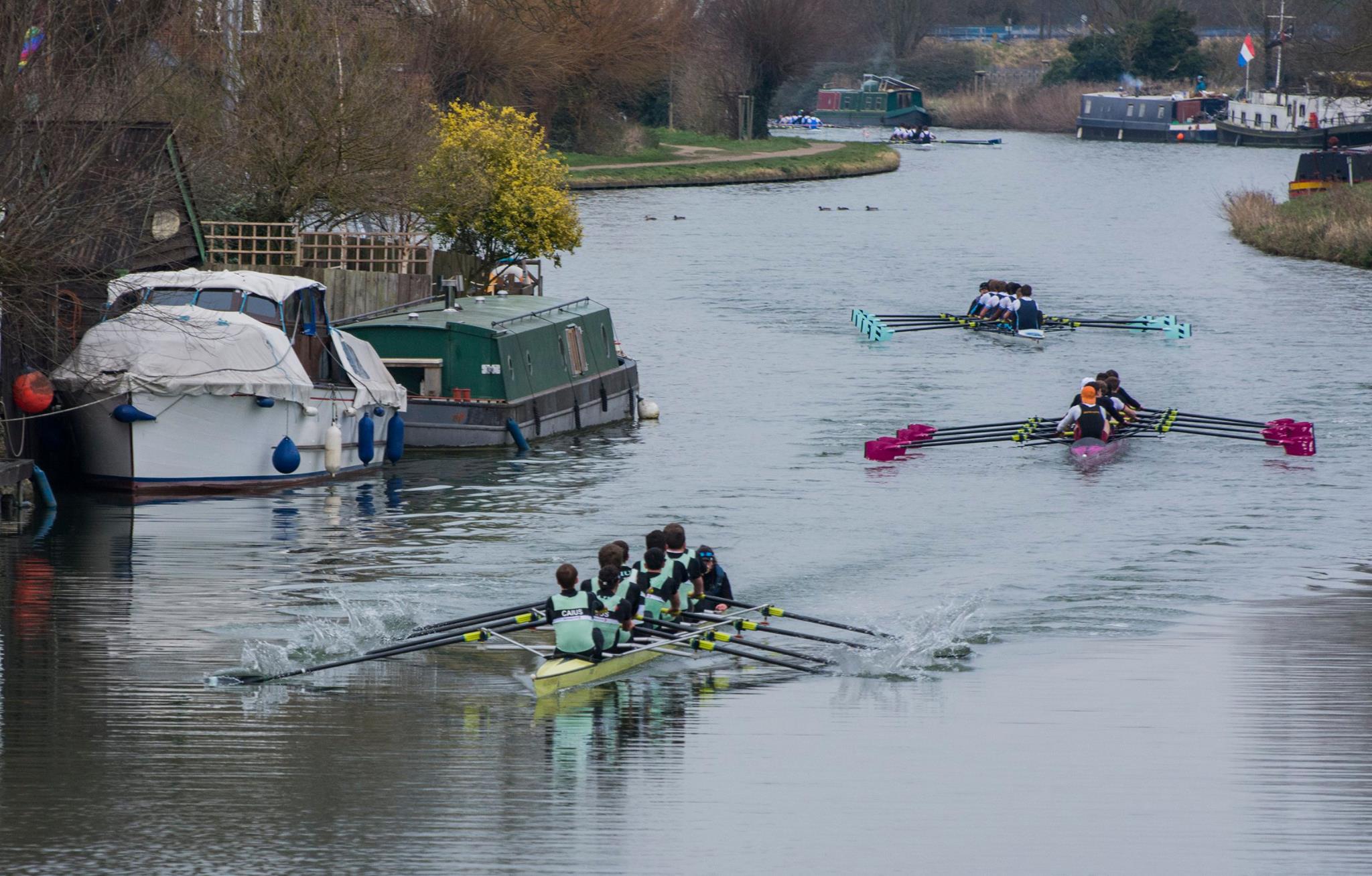 The fines were amusing as always, with these gems:

Our plan was simple: row the race we’d been rowing for the past 3 days, responding to any attempts Downing makes. This time we don’t pull out an early lead, with Downing really pushing to keep up. They keep the rate high up in the 40s way past the first corner in an attempt to get closer to us, but we keep them safely at 1.5 lengths. After the corners we lengthened with the tailwind, slowly pushing away from Downing. Pembroke got close to Downing, spurring them into a push, but nothing to worry us.

As we passed the final bridge approximately 700m from the finish, we started putting down all the pressure we could. 2 lengths separation became 3, became 4. We were pulling further and further away and there was nothing the other crews could do to stop it. We crossed the line and retained the headship, welcomed with bottles of Prosecco and the Caius flag, which we paraded up and down the course. 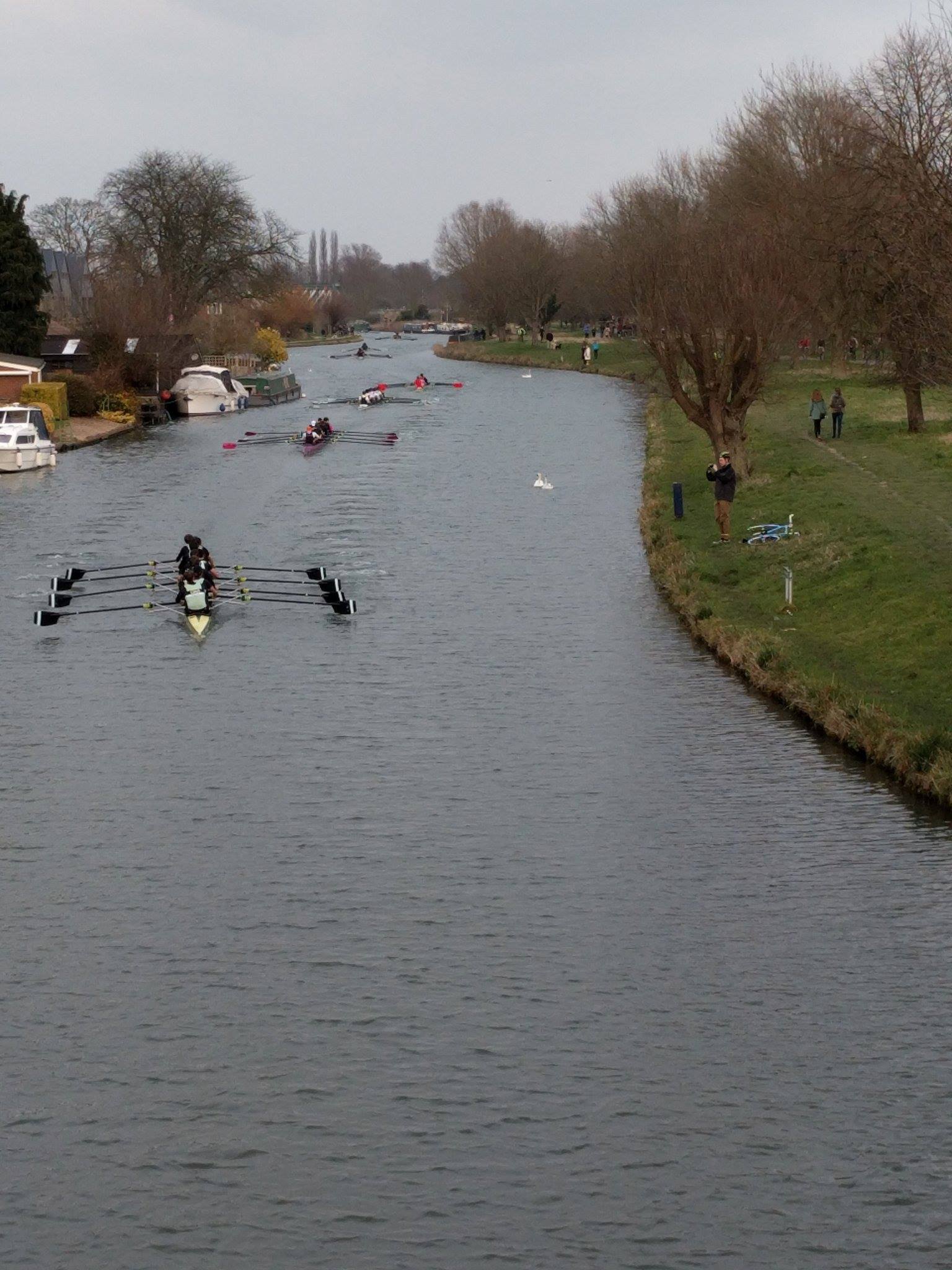 And then of course, we threw our cox into the water, as is traditional.

Rowing at Dover really inspired me to push harder, go that extra distance, and keep going even when every fibre of my body is telling me to stop. That determination from coastal rowing helped Caius retain the headship this week, and in no small part I’m deeply grateful to all the members of Dover Rowing Club who helped me take those first steps into rowing and progress ever higher. 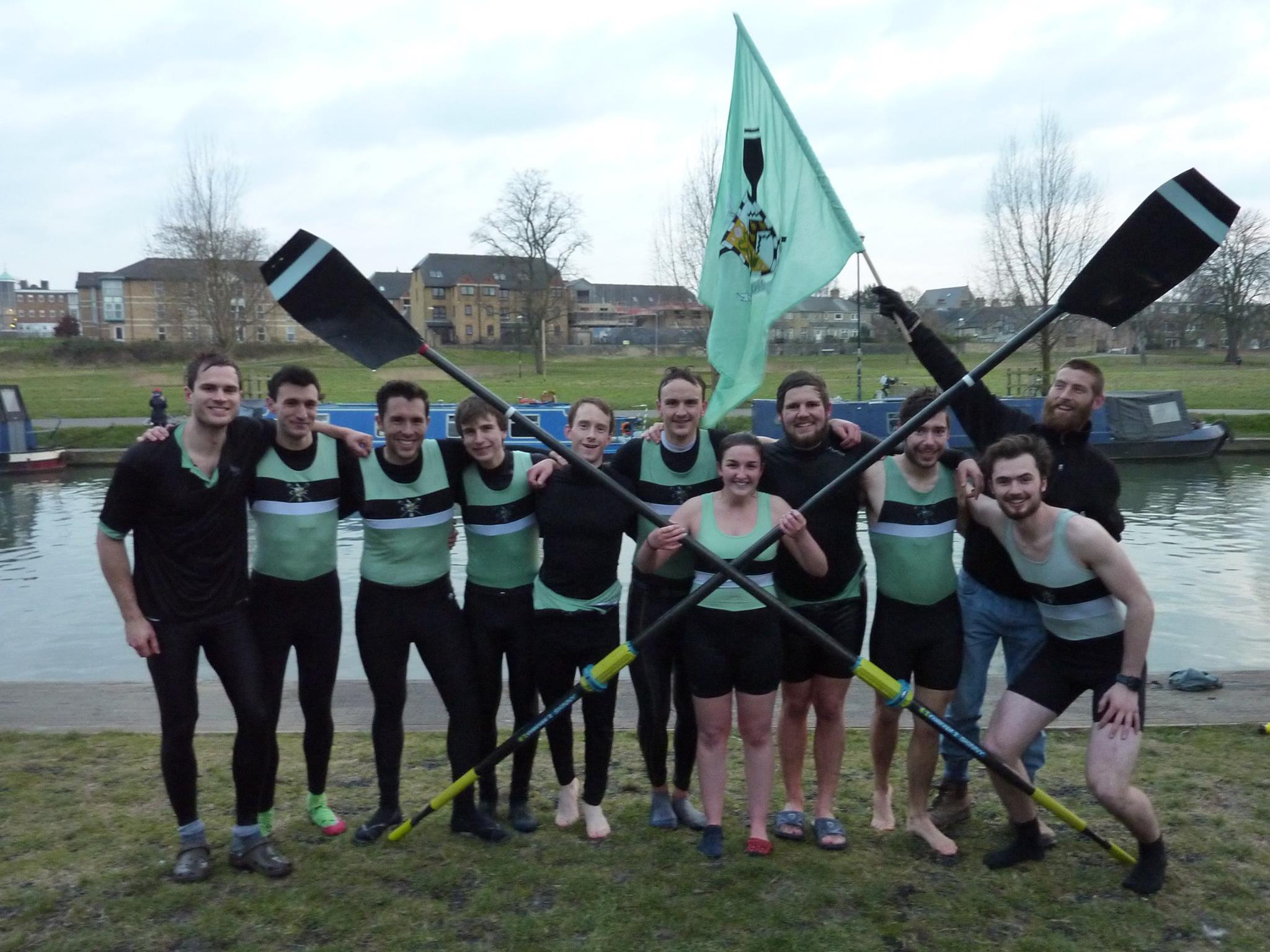 Welcome to our new website! After joint collaboration between many members of the club, countless tweaks and several revisions, it’s finally here. This version is an overhaul of our previous website to work better on mobile devices, be easier to update and attach content, and most importantly, to help show the world we are the coolest club on the south coast!

And, even better, any posts we make here will show up on Facebook (and other social media sites if/when we set them up), so you can keep up to date with our goings on without the hassle of checking yet another website. Go like our Facebook Page and you’ll get everything posted here too.

Big thanks to Chris Hall for helping set everything up, and the DRC committee of Jacky Silk, Jo Johnston, Tony Burrows, Maria West-Burrows and Petra Crow for their feedback. And, of course, Dave and Sal Fountain for making the original website from which this is heavily inspired. I (Robin McCorkell) merely took all the feedback and great ideas and shoehorned them into a website.