Jasper Mallet took three wins as Dover Rowing Club competed in the Herne Bay Regatta helping with his crew mates to secure the Junior Aggregate and second place in the overall Aggregate to the hosts. Mallet’s first win was with team mates Sebastian Steele, Finn Cockerell, James Hale coxed by Freya Emmerson in the Junior Men’s Fours. Having already secured the CARA title the crew got a great start and established a good lead. At the line they had a comfortable win by several lengths. Mallet would face Sam Pile in the Men’s Novice Sculls which saw both scullers push ahead of the field with Mallet having the edge. On the run home Pile pushed hard but could not significantly close the gap as Mallet secured his first sculls win by a couple of lengths. In the Men’s Junior Pairs Mallet and Hale faced Steele and Sam Pile. Mallet / Hale got the better off the start and new pairing Steele and Pile went into pursuit mode. Mallet / Hale led through the turn and headed home a few lengths ahead of Steele and Pile who secured an excellent second. 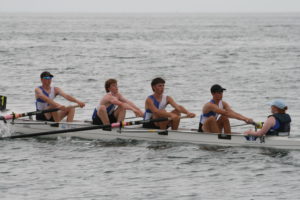 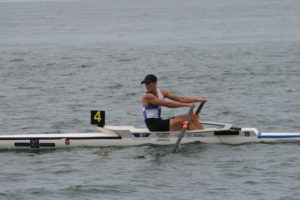 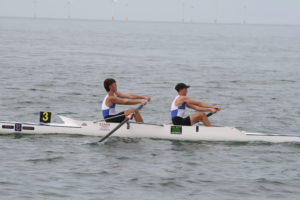 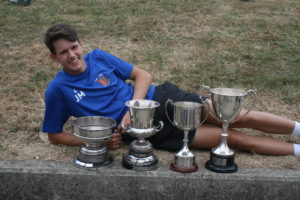 The Veteran 50+ race saw Dover’s Nick Bailey and Jo Woods competing with rowers from Bexhill and Folkestone. After a slower start the composite crew worked their way through the field to turn in second and moved steadily ahead to confirm the runner up stop. 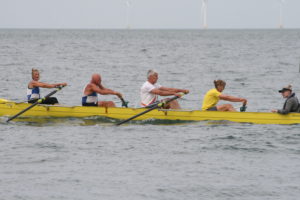 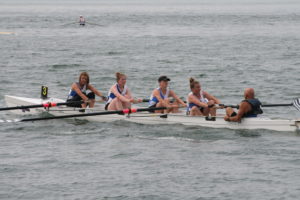 The Ladies Senior Four saw Woods, Ruby Cockerell, Rachel Bailey, Charlotte Cox coxed by N Bailey get off to a great start leading through the first few hundred metres. At the turn Dover were lying third and would hold this position to the line. In Ladies Senior Pairs R Bailey and Cox would again have a great start and initially held the lead. In the charge to the buoy Dover’s crew would drop to third. On the run home the crew was unable to catch the lead taking third at the line.
The Men’s Junior Senior Four saw two crews Ben Gomm, Chris Hall, Steve Woods, Tom Stothart coxed by Emmerson. S Woods had been a late replacement and was having his first race for several years. Dover’s second crew had Steele, F Cockerell, Max Jerden, Pile coxed by Felicity Ulyatt. Emmerson drove her crew into the lead and were leading out of the turn with Ulyatt’s crew initially in second before dropping to fourth by the turn. Emmerson’s crew found themselves in a battle with two home crews, gradually both Herne Bay crews were able to overhold Dover’s crew in a tight finish. Ulyatt’s crew would come home in fourth. 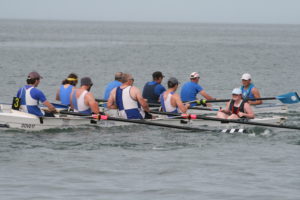 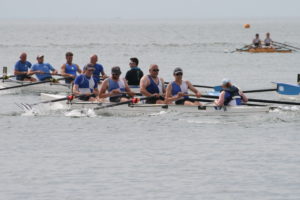 F Ulyatt coxed the Ladies Junior crew of Marie Cockerell, Emily Harvey, Emmerson, Maria West-Burrows which set off in the middle of the field and would need to chase down the leaders. Coming out of the turn, Ulyatt steered the crew into third as they pursued the leaders to the line, but were unable to improve their position.
Stothart and Hall competed in the Junior Men’s Sculls. Stothart got the better start moving into a tight battle for second. Coming out of the turn it was Stothart in third and Hall in sixth. Neither sculler could change their positions at the line. Stothart and Hall combined in the Men’s Junior Pairs where they had a good start moving into second, they would battle the crews in the fast water. They were in fourth at the turn and found themselves unable to close down third place before the line. 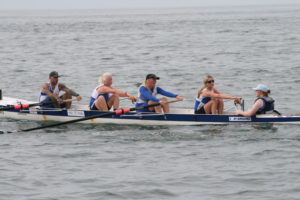 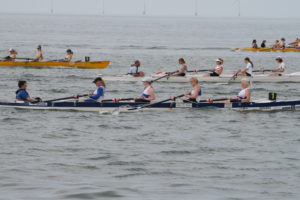 Dover Novices Ladies crews M Cockerell, Sophie Jerden, Holly Harrington, Nikki Leggatt coxed by Emmerson were racing Cannelle Ulyatt, Harvey, Emma Sawkins, Emmeline McArdle coxed by F Ulyatt. Neither crew had a great start and it would be a case of running through the field to get points. Emmerson’s crew successfully advanced through the field to take third as they started on their return leg with F Ulyatt’s crew up to sixth, the positions they would hold at the finish.
Veteran 40+ would Kevin Ulyatt, M Cockerell, West-Burrows, , McArdle coxed by Emmerson would come home in fourth. M Jerden, Brendon Ulyatt, K Ulyatt, Jason Cunningham coxed by Emmerson would come over the line in fifth with a composite crew featuring Pile in Sixth. 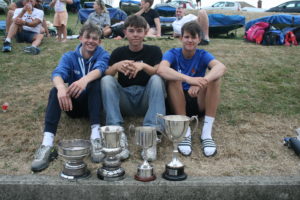 DRC would like to thank club members Chris Wong, Laine and Damion Napier at their band the Ratzkins for their fund-raising concert at the Marina Curve on Sunday