It was a winning start for Dover Rowing Club as they secured 3 wins at the Viking Shield held at Deal.

The first crew on the water Josh Grassby, Ben Fagg, Bo Corby, Beau Everington-Nee coxed by Felicity Ulyatt were racing in the u14 Quad race. The young crew raced from Deal pier to the club house steadily pulling away from the rest of the field in a mistake free run, winning by a several lengths. 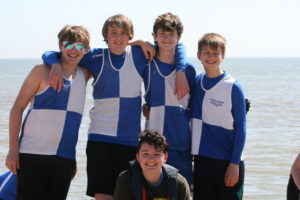 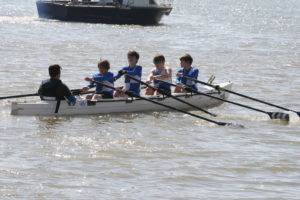 The Novice Men’s Four saw Dover enter two crews Sebastian Steele, Sam Pile, Jasper Mallet, James Hale coxed by Freya Emmerson and Kevin Ulyatt, Brendon Ulyatt, Jamie Smith, Eddie Briggs coxed by Tony Burrows. Both crews got off to a good start with Emmerson’s crew establishing a lead by the first turn with Burrows crew getting impeded in the congestion dropping them down the order. The young Emmerson crew moved to a sizable lead at the run to the second buoy, allowing them a clean run to the finish to take the win. The Burrow’s crew fought hard for third but were unable to close the gap leaving them in fourth. 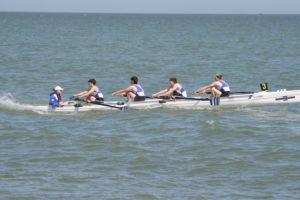 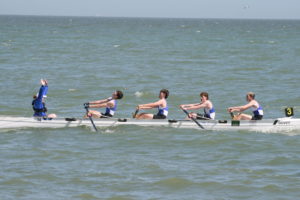 The Men’s Junior Fours again saw two crews with Steele, Mallet and Hale joined by Finn Cockerell with Emmerson as cox and the second crew of K Ulyatt, B Ulyatt, Jon Cook and Matt Barnett coxed by Burrows. Emmerson’s crew again had a good start and found themselves battling Folkestone to the first turn. Burrows crew had moved to third out of the turn but were unable to improve. Emmerson’s crew would establish a steady lead as they pulled clear of Folkestone, taking a comfortable win.
The Men’s Junior Sculls had Tom Stothart and Chris Hall racing. Stothart had a messy start getting caught up with a Herne Bay Sculler as the other racers moved past. Hall got entangled at the turn as Stothart closed the gap and moved into the lead. Stothart led to the second buoy where a bad turn opened the door to Herne Bay to slip past for the win, with Stothart second. Hall would cross the line in fourth. 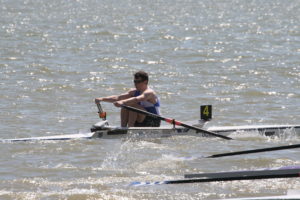 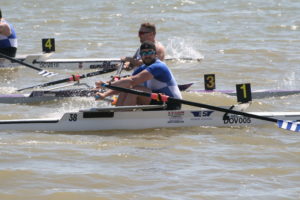 Heather Corby had a frustrating Ladies Sculls race during the worst conditions of the day. The Umpires turned the race around when she was leading and the crews raced back to the finish line where she crossed the line in second place.
Ladies Junior Fours saw Canelle Ulyatt, Freya Emmerson, Maria West-Burrows, Nikki Leggatt coxed by F Ulyatt get a great start. At the first turn they were in third but were unable to improve on their position as the race continued. 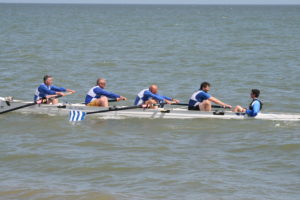 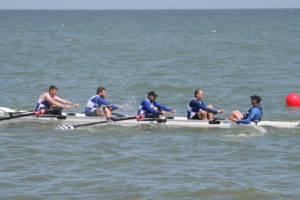 The Masters 40+ was combined with the 50+ event. J Cook, M Barnett, J Smith and E Briggs were coxed by Emmerson racing against the Dover second crew of Paul Scrivener, Neal Scrivener, Nick Bailey, Vic Evans coxed by Ollie Scrivener. A great start from the older Scrivener crew saw them jump ahead of their Dover teammates. At the first turn its was Scrivener third and Emmerson’s crew fourth, the gaps grew on the race down the course and neither crew could improve their positions. 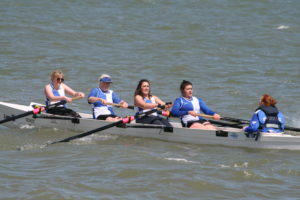 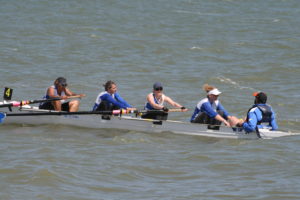 Two Dover crews entered the Ladies Novice Fours race. Emily Harvey, Marie Cockerell, Jodie Lott, Krista Davis coxed by Emmerson with C Ulyatt, N Leggatt, Emmaline McArdle, Heather Corby coxed by C Hall. Emmerson’s crew got the better start moving ahead of Hall’s crew in the rougher conditions. It was challenging conditions for all crews as the waves made making a clean catch, to help push the boats on, difficult. Emmerson’s crew would come home in fourth and Hall’s crew in 5th.
Stothart and Hall combined in the Senior Pair’s race. A technical issue and a poor turn dropped them to seventh. A brave first Novice Sculls race from Sam Pile would see him capsize shortly after the first turn bringing an unfortunate end to his race. 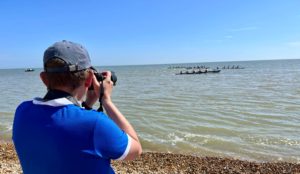