Dover Rowing Club’s secretary Jacky Silk had a busy time before Brighton and Hove Regatta requesting late entries due to Dover’s returning university contingent. Silk’s work paid dividends in the Men’s Novice Sculls as Tom Stothart was able to race alongside Club Captain Tony Burrows. Whilst Burrows found the competition too hot to handle in the enlarged field Tom Stothart showed his improved technique as he powered off the line threading a route to avoid paddle boarders on the course. At the turn Tom Stothart was first but in the unfavoured outside lane, driving hard he moved more inshore increasing his lead on the return leg and winning by several lengths. Burrows came home in 10th. 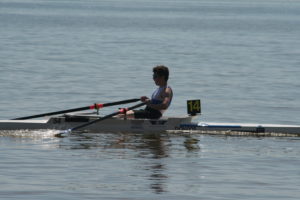 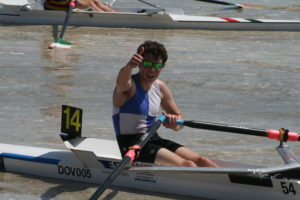 The first race of the day had seen Lucy Horton, Rebecca Stothart, Morgan Evans, Jade Jordan coxed by Burrows racing in the J16 Ladies Quad Sculls. The young crew fought hard with two older crews jumping out into an early lead. Dover’s ladies fought hard to remain in contention for 3rd place before dropping back to 5th at the finishing line. There was improved fortune for Jordon in her first sweep race where she joined a Herne Bay Novice Ladies 4. Jordon appeared to initially struggle with this unfamiliar crew before finding her rhythm. Turning first, they increased their lead scoring a comfortable win. 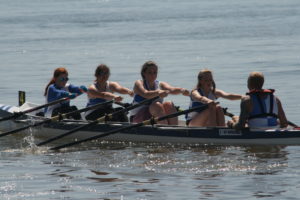 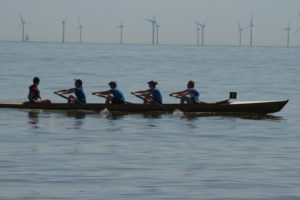 Jo Johnston lined up next in the Ladies Sculls race an event she has championed to return to the CARA events calendar. Johnston had a good start in a large field and was fighting for third at the turn. A problem slowed her in the last quarter before she kicked on to hold off an Eastbourne sculler taking 5th place.

The Men’s Junior Pairs saw the Dover field two crews of Chris Hall / Tom Stothart and Josh Cullen / Ed Thomas. A good start saw both Dover crews up with the leaders at the 500m point with Hall / Stothart fighting the strong Herne Bay pair for first. Cullen / Thomas struggled a little with steering taking the widest line. Hall / Stothart pursued the Herne Bay crew to the to the line taking second. Cullen / Thomas worked hard on the return leg and finished in the points in 5th place. 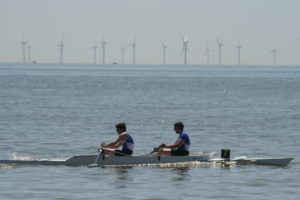 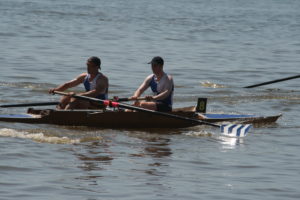 The Ladies Senior Pairs saw Johnston and Maria West-Burrows on the water. The pairing who prefer rougher conditions had a good start see them just behind the leading boats as they neared the turn. On the return they set their sights on the third placed Shoreham crew. Pushing hard the veteran rowers started to close as the line approached gaining an overlap before running out of water, leaving them in 4th.

Hall, Dover’s sole entry in the Men’s Junior Sculls, was a little behind from the start as he pushed towards the outer buoys. Turning second Hall was leading his Uni rowing captain at 1750m only to fade under pressure as the line approached leaving him in 3rd.

Thomas, Hall, Cullen, Tom Stothart coxed by Jordon were out in the Men’s Junior Fours. A good start saw Dover’s crew in second in the first few hundred metres. A good coxing debut from Jordon helped the Uni boys push for third out of the turn and led to a head to head with the Shoreham crew on the return leg with Dover losing out by less than a canvas leaving them 4th. 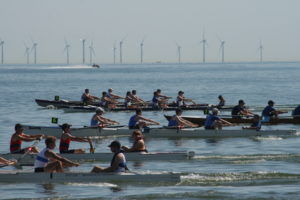 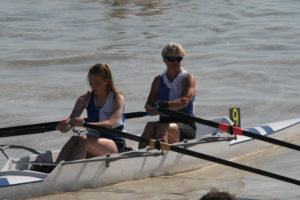 The last event saw West-Burrows / Rebecca Stothart and Johnston / Jordon competing in the Ladies Double Sculls. In another good field the Dover crews kept out of trouble in the outside lanes. By the turns the middle lanes appeared to have the advantage with Dover’s crews struggling for the lower points places. Johnston / Jordon narrowly missed out coming home in 7th whilst West-Burrows / R Stothart came home in 9th. 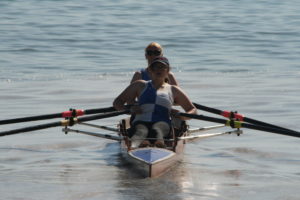 Dover RC eyes now turn to the weather as they are due to host their home regatta in Dover Harbour on Saturday 9th June. Racing starts at 10.30am.