The weekend saw Dover Rowing Club in action in the opening regattas of the Coast Amateur Rowing Association season. On Saturday Dover joined Hastings RC in celebrating their 150th anniversary with the regatta returning to their home waters for the first time in several years. On Sunday the regatta moved to Bexhill. 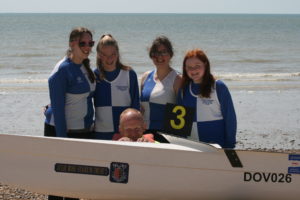 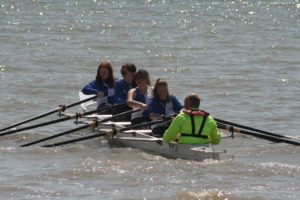 First on the water was the J16 Ladies Quad Sculls crew of Lucy Horton, Chloe Bicker, Rebecca Stothart, Jade Jordon coxed by Tony Burrows. 12 year old Horton was a late replacement having only recently started rowing. The young crew, featuring three first time racers, rapidly moved into second and at half way were a few lengths behind the lead boat. A strong last 500m saw them close down the Deal crew gaining an overlap before the finishing line and leaving them in a well deserved 2nd place. Bexhill regatta proved tougher for the young crew but they fought hard in a larger field to finish 5th.

Club Captain Burrows found himself in the outside lane for the Novice Sculls and struggled on the outward leg. A great turn saw him jump three places and begin moving through the field only for his progress to be stopped by a capsize in front of him. This forced him to stop, manoeuvre and restart leaving him in 7th at the finish. Burrows had a similar outcome on day 2 steering round the rescue boat on his way to another 7th place. 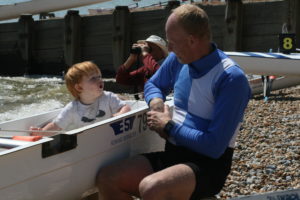 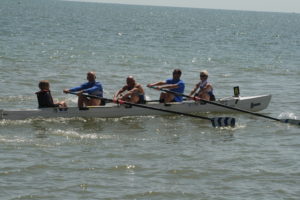 The Veteran 40 fours race saw Johnston, Nick Bailey, Burrows joined by Mark Jefferies from Herne Bay coxed by Chrissy Purvis. The crew got off to a great start and were towards the front of the field for the first 500m before dropping a little off the pace. By the buoy turn the veterans were in 5th position which they held to the end of the race.

Ladies Junior Fours crew of Jen Jordan, Purvis, West-Burrows, Kate Smith with Johnston as cox were left slightly at the start before moving up through the field. A chaotic turn saw three crews aiming for the same buoy and colliding which damaged a rigger. This gave out during the return leg, leaving the crew battling home in 5th. 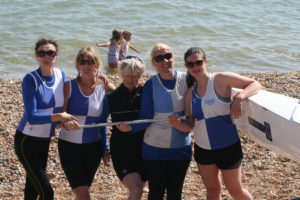 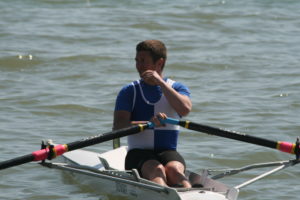 Chris Price, competing in the Men’s Junior Sculls, managed to avoid the capsize of a competitor to be in the mix in the early stages. His challenge fell away by the turn and he came home in the points in 5th place.

Johnston, competing in the Ladies Sculls, found that the lead two scullers were very strong leaving her to fight for the minor places. Eventually coming in 5th before jumping into the Senior Ladies Pairs with West-Burrows two races later. The crew, who prefer rougher conditions, found the going tough with the quick turn around taking its toil leaving the boat pushing for the final points for 6th but just missing out. Johnston injured her wrist in the Sculls race on the second day which saw her come home in 7th.

At Bexhill Antonia Reed helped out Herne Bay in the Ladies Novice 4 where the young crew came in 5th.