Dover Rowing Club’s Scullers led the way at Folkestone at the weekend with conditions more difficult than at earlier regattas this season. The Men’s Junior Sculls saw Chris Hall and Chris Price in action. Hall got off to a good start and was up with the leading boats whilst Price was more cautious. Hall reached the buoys in 3rd but with a good turn made up two lengths to move into 2nd. However the leading sculler capsized soon after the turn leaving Hall fighting Swarbrick from Shoreham for the victory. Price was steadily progressing through the field and was lying 4th with 500m to go. Swarbrick was leading in the later stages, with Hall pursuing hard, but also capsized, sportingly calling ‘well done Dover’ from the water as Hall passed him. Hall held off a fast charging Bexhill Sculler to take the win with Price coming home in 3rd. 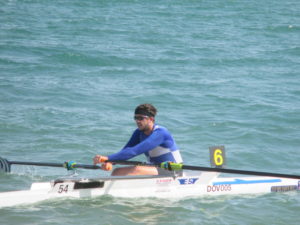 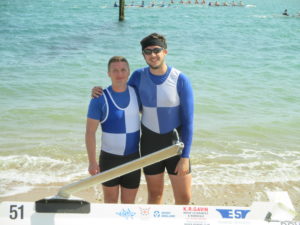 The Ladies Double Sculls saw Dover enter two crews, Jo Johnston / Rebecca Stothart and Maria West-Burrows / Jade Jordon. An early crab stopped West-Burrows / Jordon leaving them at the back of the field. Johnston / Stothart got off to a steadier start moving through the field to be 3rd at the turn. On the return leg Johnston / Stothart set sights on the 2nd place crew who they started to overlap with 300m to go. With heavier waves hitting both boats the pressure was applied by Dover who rowed through Herne Bay taking 2nd. West-Burrows / Jordon crossed the line in 8th. Johnston had earlier taken 3rd in the Ladies Sculls event which had seen her manage the conditions and survive a scare after the turn. The J16 Ladies Quad saw Stothart, Chloe Bicker, Ella Day, Jordon coxed by Johnston enter a tight battle with Herne Bay for 2nd. Dover’s youngsters pushed hard and started to overlap the inside crew before they ran out of water coming in 3rd. 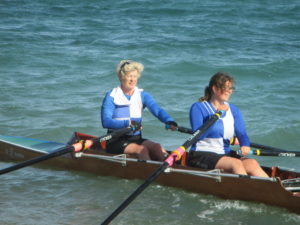 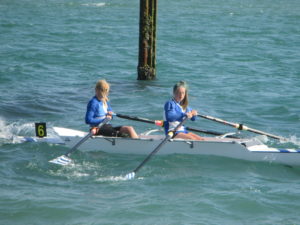 The Men’s Novice Sculls saw three boats in the two qualifying heats, Nathan Peach, Tony Burrows and Paul Scrivener. Peach and Burrows found the going tough in the opening heat finishing outside the qualifying positions. P Scrivener’s start looked disastrous as he was impeded by a Shoreham Sculler leaving both boats locked together. Once P Scrivener restarted he tore off in pursuit of the field passing several opponents to qualify comfortably. With an unfavoured outside lane in the final P Scrivener found conditions challenging as he headed to the turns. Moving inside on the return leg he gradually moved up the points positions finishing 4th. 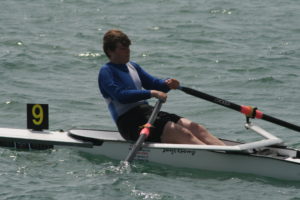 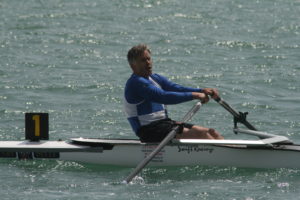 In the sweep rowing events the Ladies Novice 4 crew of Jordon, Stothart, Day, Kate Smith coxed by Chrissy Purvis got a good start from the outside lane turning 3rd. Slowly but steadily they closed the gap on the 2nd placed Folkestone crew and in the last 300m were neck and neck before pulling clear after surviving a heavy bow slap from a large wave.

The Men’s Novice 4 of Taylor (Herne Bay), Jon Cook, Peach, Jacob Scrivener coxed by Purvis got a solid start. Their boat was just out of the points at the turn before moving up on return leg and just missed out on 5th after battling Herne Bay in the last quarter. 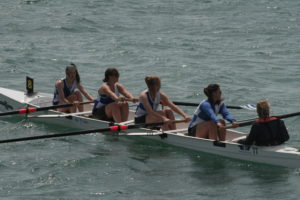 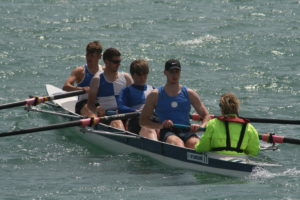 The Ladies Junior 4 of Jen Jordan, Purvis, West-Burrows, Smith coxed by Burrows worked hard on the outside to stay in contact with the inside crews. Turning in the middle of the field they fought to maintain a points finish in 6th.
The Ladies Senior Pair of Johnston and West Burrows chased down Worthing at the turn and were pushing for 3rd to the line. The Men’s Senior Pair of Hall and Burrows came home in 9th. 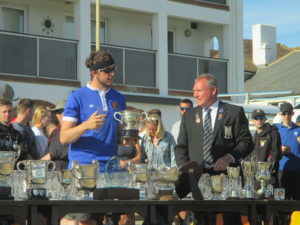 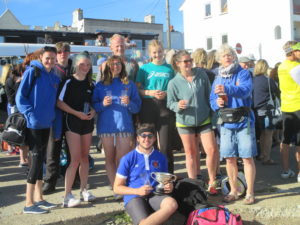 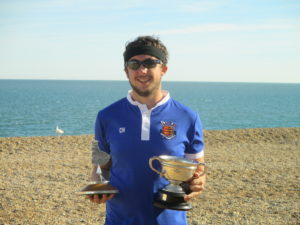