Last weekend saw Dover Rowing Club competing at the Deal regatta in typically challenging coastal conditions. Jo Johnston and Maria West-Burrows, first on the water in the Ladies Senior Pairs, got off the line in fine style, taking the initial lead. As the race progressed Worthing took control and Dover dropped to 3rd coming to the 2nd turn. A heavy collision between the Shoreham and Folkestone crews meant Dover were able to secure 2nd place at the finish. 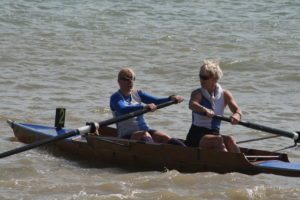 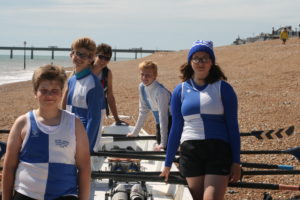 The young J14 quad sculls crew of Will Crickson, Rebecca Stothart, Ty Young, George Burrows with Tom Stothart as cox found conditions difficult against the older crews in the straight race. Working hard they remained competitive in the early stages before dropping to 6th on the run into the line.
Men’s Junior Sculls had Chris Hall and Chris Price battle heavily . Hall got off to a good start moving with the lead scullers whilst Price struggled to make early headway. After the first turn Hall was in a 3 way battle for 3rd with Price fighting for the minor places. Hall was third at the 2nd turn and was able to hold position despite the strong challenge from the 4th place sculler. Price coming home 8th.
The Ladies Junior Four of Jen Jordan, Chrissy Purvis, West-Burrows, Mary Newcombe coxed by Tony Burrows were mid field over the start line and had to work hard on the outward leg. Approaching the second buoy the Dover crew were 4th and over a length behind the Deal but a determined challenge saw them close down Deal to level pegging; only missing out by less than a canvas at the line. 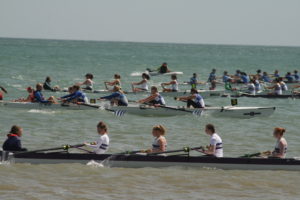 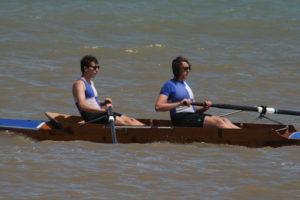 The Vet 40’s saw returning Jo Woods at bow, Johnston, West-Burrows, T. Burrows with Newcombe coxing get a slow start leaving them in a hole as they chased the field. Working well together the crew pushed hard throughout the race turning 4th out of the second turn to hold their position to the finish.
With conditions worsening T. Stothart and Hall took to the water for the Men’s Junior Pairs. Dover were 2nd off the start and avoided some of the chaos of clashing blades behind them. The Dover boys pushed through the Bexhill boat to lead at the 1st turn where they kicked on through the middle of the race taking several lengths lead to the 2nd turn. Picking their way through crews heading the opposite direction the youngsters came safely home for their first league win together. This was Stothart’s first win after being runner up in a number of races. The win also help secure Dover’s second place in the Men’s Junior Aggregate competition.
The Men’s Novice 4 launched through huge breaking waves as Ollie Hurrel, Toby Scrivener, Guy Hadfield, T. Stothart coxed by Ollie Scrivener sought a novice win on Stothart’s last opportunity as his earlier win promotes him to Junior status. Despite a strong first few strokes the crew slipped to 3rd in the first quarter of the race behind a composite crew and Worthing. Between the turns they progressed to 2nd and, although Hadfield’s seat derailed at the 2nd turn, they chased down Worthing, piling on the pressure, but narrowly missing out by a canvas in the end.
Johnston found herself facing her Worthing nemesis for the first time this season in the Ladies Open Sculls. Johnson found herself in 3rd after the first 100m but rowed through the Deal sculler to move into pursuit of Worthing’s former international. Keeping in contention through the first turn before steadily losing ground and securing runner up at the finish. 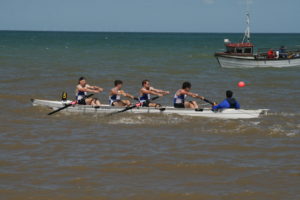 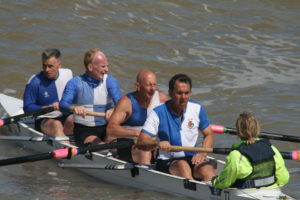 Vet fours 50+ race saw Paul Scrivener, Burrows, Nick Bailey, Andrew ‘Oily’ Bryant coxed by Purvis . With the swell deepening the veteran rowers battled for the lead off the line. The rowers struggled to match the leading two boats after the first turn and came under heavy challenge as they battled to hold on to 3rd place against the Deal crew. The fighting spirit in the crew saw them hold on to their place by half a length.
Burrows and T. Stothart both qualified for the Novice Sculls final by finishing 4th in their respective heats. The final was in worse conditions and simple launching was dangerous. A tired looking Stothart struggled from the start whilst T. Burrows pushed to be in the mix. By the second turn Burrows was 6th and Stothart 7th. Burrows put in a late push in pursuit of the Southsea sculler, closing him down and taking him on the line by the smallest margin to take 5th.
The Scrivener family entered the Men’s Junior Fours with three rowing above their status. Paul, Neil, Toby, Tim, with Ollie coxing found the going tough against the more experienced crews. They were unable to break into the points places coming home 9th. 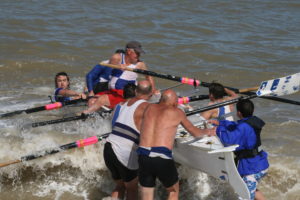 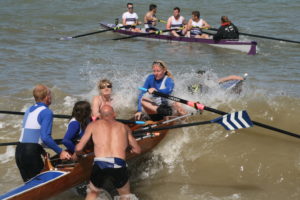 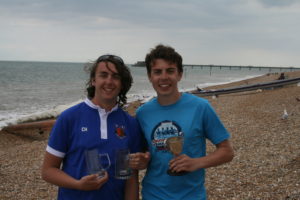 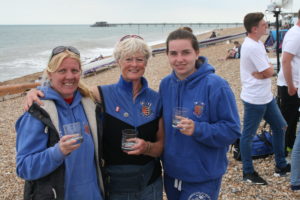