The weekend saw Dover Rowing Club in action in the traditional preseason regatta, the Viking Shield, hosted by Folkestone RC. With new crew combinations formed in the off season this regatta gives them their first opportunity to compete.

The Men’s Junior Pairs saw new partnership of Tom Stothart and Chris Hall starting well. They found themselves fighting for second place on the outward leg as the buoy turn approached but the leading Shoreham boat over shot their turn and the young Dover crew seized the opportunity making a tight turn and springing out to a couple of lengths lead. They fought hard and held on to take the win by a clear length. 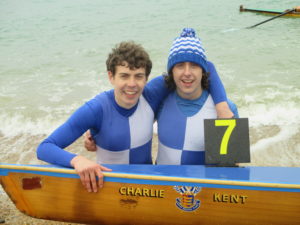 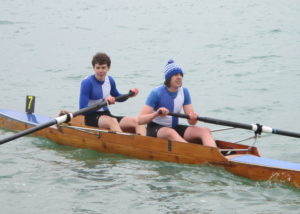 Novice Sculls saw Dover scullers Stothart, Tony Burrows and Paul Scrivener comfortably come through qualifying rounds. In the final P Scrivener flew off the line to take the lead which he held for most of the first leg with Stothart mid field and Burrows at the back. P Scrivener struggled to maintain contention after the turn dropping back to finish 7th a little ahead of Burrows who was 8th, with Stothart leading them and taking 5th.

Men’s Junior Senior 4’s saw P Scrivener, John Cook, Guy Hadfield, Neil Scrivener coxed by Olly Scrivener. The crew had a strong start and were fighting for places until Cook in his first race caught a monster crab springing his blade from the gate and leaving them to trail behind the field finishing 5th.

The veterans race had P Scrivener, Burrows, Nick Bailey, Jo Johnston coxed by Mary Newcombe competing against a strong Folkestone crew on home water. In a tight race the Dover crew were unable to force their way into the top two places finishing in 3rd place.

Ladies Junior 4 featured Jen Jordan, Chrissy Purvis, Maria West-Burrows, Newcombe coxed by Burrows. Dover’s crew found themselves in a battle with the three Folkestone boats. After the turn Dover repeatedly clashed blades with the inside Folkestone boat until Dover’s ladies managed to pull clear finishing the race in 5th.

Stothart, Cook, Hadfield, Austin Mills coxed by O Scrivener raced next in the Men’s Novice 4’s. An unfortunate foot injury hampered Cook in this race that featured one of the largest fields of the day leaving the Dover crew coming home in 7th.

Experienced crew of West-Burrows and Johnston competed in the Ladies Senior Pairs. The ladies crew pursued the Shoreham boat from the start and maintained contact after the turn but were unable to overhaul their opponents, finishing 2nd. 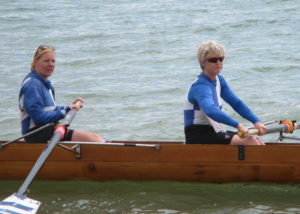 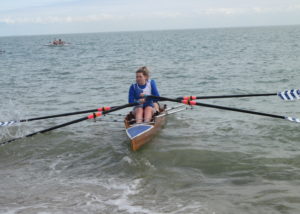 In the Men’s Junior 4’s Dover had a mixture of Novice and Junior rowers. Stothart, Hall, Hadfield, Mills coxed by O Scrivener worked hard to stay in contention on the outbound leg but lost ground after the turn coming home in 4th.

Chris Price and Hall both qualified for the Junior Sculls final. Hall suffered from being in the previous race and was unable to defend the Keith (Butch) Thomsett Memorial Trophy he won last year coming home in 5th with Price in 7th.

The last race of the day had Johnston and Newcombe compete in the Ladies Double Sculls race. The lead Shoreham boat leapt out to an early lead with Dover’s crew caught in a three way battle for second. The turn proved crucial as Dover lost ground and had to settle for 4th.