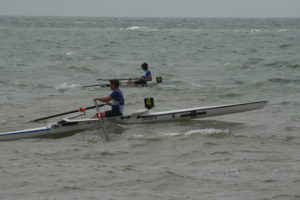 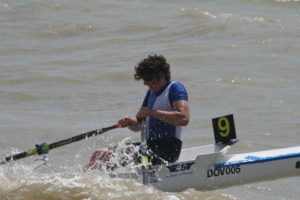 The weekend saw Dover Rowing Club in action in Bexhill for the Hastings and Bexhill Regattas. Conditions for the Hastings regatta were extremely challenging and the event was cancelled after 9 events. The only Dover Rowers to race were Chris Price and Chris Hall in the Men’s Junior Sculls. Price, a light weight rower, struggled to make progress and abandoned early, whilst Hall pushed on making the turn in 3rd place despite waves breaking over his shoulder. Hall then caught a runner out of the turn pushing him a length ahead of the home rower, an advantage that he maintained to secure 2nd place. 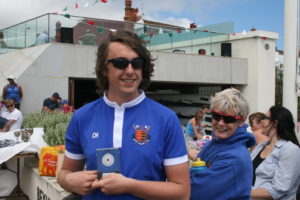 The Bexhill Regatta, on Sunday, had calm conditions throughout the day. Dover’s first crew to compete was the Men’s Junior 4’s featuring disabled rower Jon Cook in his first CARA regatta where he rowed with Austin Mills, Tom Stothart, Hall and Jo Johnston coxing. The crew, containing 3 novice rowers, competed well and overhauled a number of crews after a slow start. At the turn the crew moved into 4th place which they comfortably held to the finish.
Hall’s Junior Sculls race was not without incident. The young rower was preparing to make his push with 400m to go when the rower in front of him capsized forcing him to stop and manoeuvre around and leaving him in 5th overall. Hall then raced with Stothart in the Men’s Junior Pairs but issues with a foot plate slowed them off the start leaving them chasing the field. By the buoy they were battling for third with the Herne Bay pair on their inside. The race was neck and neck with the boys missing out finishing in fourth.
Dover’s Ladies Junior 4’s crew was Jen Jordan, Chrissy Purvis, Maria West-Burrows, Mary Newcombe coxed by Johnson. The Dover boat got off to a fine start from an outside lane and shadowed the strong Shoreham crew until the turns where Shoreham extended their lead with Dover 2nd away from the buoys. The tougher outside water gradually took its toll as the ladies crew could not hold off the boats on their inside dropping back to 4th by the finish. 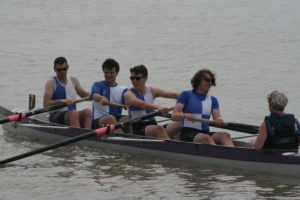 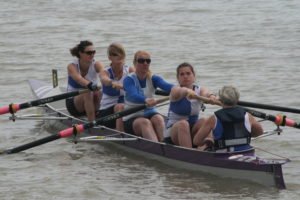 Dover’s Ladies Senior Pair of West-Burrows and Johnson were surprised by the quality of their field as they struggled to make headway on the outbound leg leaving them in 7th after the turn and despite their best efforts were unable to improve their position. Johnson was Dover’s last Rower on the water as she competed in the Ladies Single Sculls. Johnson, who had campaigned for this event to return to full CARA status, got off to an excellent start battling a younger Shoreham opponent for the lead. Disaster struck at the 800m mark as Johnson capsized gifting the race to the Shoreham sculler. Johnson regained her poise and set off in pursuit of the other scullers moving up to 3rd after the turn but was unable to row down the 2nd place competitor.