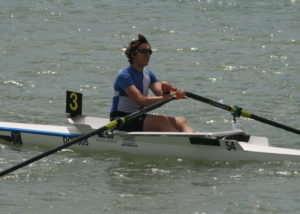 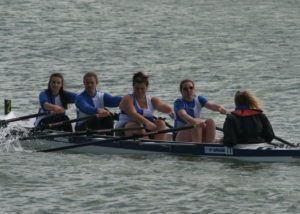 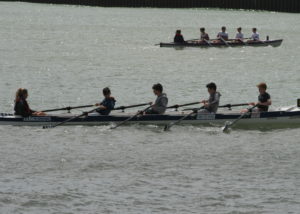 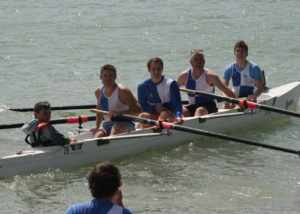 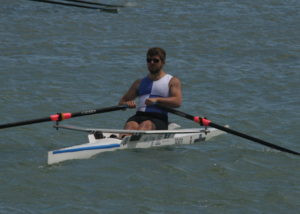 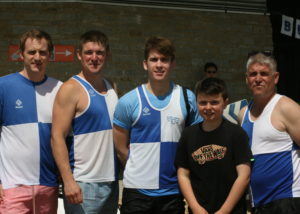 There was a strong showing for Dover Rowing Club at their weather affected Regatta at the weekend. The first race saw the Ladies Sculls and the Veteran Sculls race combined. Dover had a strong entry featuring Jo Johnston, Mary Newcombe, Antonia Reed and Lizzie Foley racing Ladies sculls and Tony Burrows in the Vet’s race. Johnston took an early lead in the ladies race reaching the turn 1st and showing her experience in the tough conditions. Burrows recognised that he wasn’t able to catch the other Veteran rower so moved to support the young rowers as they struggled in the rough water at the far end of the course, helping to reassure them. With Johnston securing 1st the remaining ladies battled through with Newcombe taking 2nd, Reed 3rd and Foley 4th.
The Men’s Novice Four saw two Dover crews; the DGSB crew of Michael Scales, Austin Mills, Tom Stothart, Cameron Mackintosh with Newcombe at cox and the Scrivener family boat featuring Toby Scrivener, Neil Scrivener, Guy Hadfield (Scrivener), Lewis Scrivener with young Ollie Scrivener as cox. The younger crew got off to the better start as both Dover crews chased Worthing. At the turn the Worthing crew maintained a small lead but, as the young Dover crew fell away, the power in the Scrivener boat began to tell. In the last 500m it was the Scrivener’s who moved into the lead and held off a late charge from Worthing. The DGSB crew came home in a comfortable 3rd place.
The Ladies J16 Quad crew of Taylor Warren, Reed, Megan Barter, Newcombe coxed by Saffron Walmsley-Preece battled hard gradually improving through the field for 2nd. The Senior Sculls saw Chris Hall struggle to compete with the leading competitors as he fought for the minor places coming home in 5th.
In the combined Mens J16 and J14 race Dover’s J14’s crew of Luke Hill, Finlay Kerr-Martin, Finlay Evans, Barnaby Brown were coxed by Walmsley-Preece. The youngsters worked hard, showing good co-ordination, given their lack of experience, in what was their 1st race. Chasing the older crews they coped well in the conditions finishing 3rd overall and 1st in the J14 race.
The Ladies Novice four crew of Claire Beaumont, Amy Lewington, Reed, Newcombe coxed by Foley had a slow start leaving them in the lower part of the field. However, the crew steadily worked through the field arriving at the buoys in 4th place as the lead crews were exiting, leaving them several lengths behind. Pushing hard Dover on the outside fought through to be neck and neck at the finish where they finished 2nd by less than a length. Barter subbed into a Worthing crew for the Ladies Novice four and finished in 5th.
The Junior Sculls saw Chris Price and Hall competing for Dover. A strong outward leg saw Price lead Hall as they sat in the middle of the field. Hall found the rougher conditions to his favour as he battled forward passing Price and moving into the top three. He progressed into 2nd at the 500m mark and held off a Deal rower in a spirited battle to the line. Price was unable to hold on to 5th place dropping to 6th in a tight finish.
The Men’s Novice Sculls had seen a large entry requiring heats. Three Dover Scullers fell prior to the final with Burrows and Mackintosh failing to make the top four and Stothart capsizing near the turns. The final saw Paul Scrivener, Harry Platts and Robin McCorkell competing. McCorkell set off powerfully leading from the outset, whilst Scrivener was also competitive with Platts towards the back of the field. By the turn it was obvious that it was McCorkell’s race to lose as he drove his boat forward to secure his 2nd novice win and promotion to Junior level. Paul Scrivener took 4th place with a lot of water in his boat and Platts finished 7th. Deteriorating conditions lead to the Regatta being halted leaving several strong Dover crews missing out.