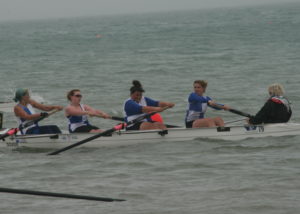 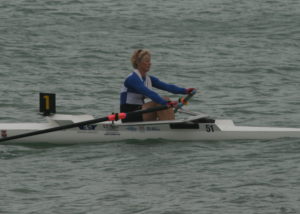 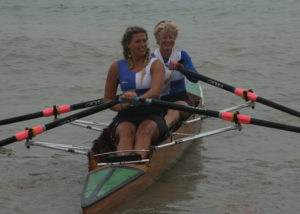 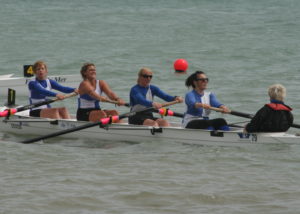 Dover Rowing Club were in action at Deal for the Deal and Cara Regattas at the weekend. Poor lane draws in rough conditions saw disappointment for Dover on a frustrating 1st day, followed by improved results on day 2, with the ladies crews leading the way. Dover Junior Ladies; Lizzie Foley, Saffron Walmsley-Preece, Maria West Burrows, Petra Matthews-Crow coxed by Jo Johnston, followed a solid 4th place on Day 1 with a powerful start on Day 2. In their 1st races together this year they reached the turns 1st and were fighting Shoreham down the return leg, but were unable to hold them off settling for the runners-up spot in a tough race. Ladies Novice Four on Day 1 featured Megan Barter, Antonia Reed, Claire Beaumont, Amy Lewington coxed by Foley. The ladies, drawn in the rough on the outside, slowly moved up the field as they fought for a lane closer to the shore. A blocked buoy turn saw the crew drop from competing for 2nd to 5th as they went wide to take next turn. Day 2 had Mary Newcombe replace Barter and Johnston taking the coxes seat. The regular crew got off to a good start in a two way race with Shoreham but by the mid point it was clear that Shoreham had the measure of the Dover crew who comfortably took 2nd.

The top placed men’s crew were Robin McCorkell and Chris Hall who had a race to forget on day 1 commencing with gaffer tape being applied to a hole in the bow of their boat discovered as they were preparing to launch. Their boat was then pushed sideways by a Southsea boat who were driven forward on top of a wave and then they were blocked at the turn. Their 4th place was all the more impressive for it. On Day 2 McCorkell and Hall found themselves in the outer lanes but a hard driving start put them in contention with the inside Southsea crew. Moving inshore at the 1st turn the Dover boys chased hard but were unable to pass Southsea coming in a close 2nd

Hall racing in the Senior Sculls completed well to pick up 6th place on Day 1 and 5th on Day 2. The Ladies Senior Pairs saw West-Burrows and Johnston manage well on both days rowing consistently taking 4th and 5th in their races. J14 Mixed Quad saw Barnaby Brown, Finlay Kerr-Martin, Finlay Evans, Georgia Shelton (Herne Bay) coxed by Paul Scrivener laboured early on before finding a good rhythm, leaving the inexperienced crew coming home 4th. The Men’s Junior Sculls had three Dover rowers with Hall, Chris Price and newly promoted McCorkell. Hall coped best in the 1st day conditions fighting hard from the outside lanes to secure 5th place with McCorkell in 7th and Price in 8th. All three rowers took points on day 2 with McCorkell taking 4th holding off Hall in 5th with Price not far behind in 6th.

Veteran 40+ Fours saw West-Burrows, Victor Evans, Tony Burrows, Johnston coxed by Hall. With Evans making his return to competition after several years, the crew gelled quickly and were in line to take 3rd place before Burrows suffered a back spasm slowing the boat which finished 4th. Nick Bailey joined forces with rowers from Folkestone, Deal and Shoreham to form a scratch crew for the Vet 50+ race. Their lack of practice together showed as they struggled to stay in contact with the lead crews coming in 4th

Novice Men’s Four race on day 1 saw Dover enter two crews; the ‘Scriveners’, Toby Scrivener, Ben Scrivener, Guy Hadfield (Scrivener) and Lewis Scrivener, coxed by Ollie Scrivener were racing the DGSB crew of Michael Scales, Austin Mills, Tom Stothart, Cameron Mackintosh coxed by Hall. With both crews hopeful of a win it was the Scriveners who started the better in the unfavoured outside lane. It became clear that Bexhill had two strong returning university crews leaving the Dover crews chasing. Despite excellent buoy turns from the young Scrivener cox the family crew could only manage 3rd place with the school boys crew in 4th. On Day 2 the DGSB crew gained a place in the Scriveners absence securing 3rd.

In the Men’s Novice sculls Burrows, Mackintosh, Stothart and Paul Scrivener failed to qualify from the heats on day 1. Day 2 saw Stothart regaining his confidence after recent capsizes pushing hard from the start and holding 4th at the halfway point only to drop back one space to take 5th overall with Mackintosh in 8th. Men’s Junior Senior Race saw Toby, Ben and Lewis Scrivener joined by Neal Scrivener with Ollie coxing, racing against Paul Scrivener, Chris Husk, Hadfield, Hall coxed by Mackintosh. It became a race for pride for the two crews as they battled each other with the Scrivener boat losing out to the their teammates as the Dover boats came in 8th and 9th. J16 Ladies only competed on Day 2 with Taylor Warren, Megan Barter, Antonia Reed, Mary Newcombe coxed by Hall. The young crew were unable to compete with the speed of the Shoreham boat and found themselves pushing for 3rd which they secured after Deal suffered a technical issue.