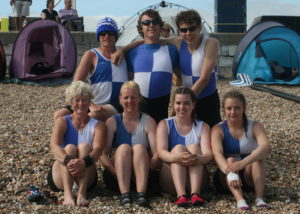 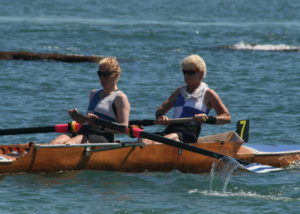 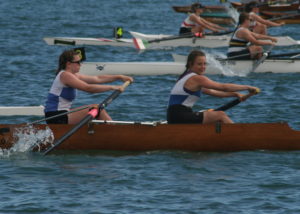 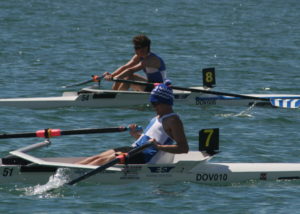 The weekend saw a hard core of Dover rowers competing at the Southsea Regatta, the traditional contest featuring clubs from CARA and Hants & Dorset divisions. Chris Hall was the 1st on the water in the qualifying for the Men’s Junior Sculls. In lane one Hall started well keeping a long steady stroke. He reached the turns in a convoy of the four leading boats taking the inside buoy and turning in 4th place, the last qualifying spot. Although seemingly under pressure in the last 300 m from the 5th placed rower, Hall responded indicating that he had plenty in reserve. In the final Hall was drawn in the unfavoured outside lane. Seeking better water he battled to a more central position at the turn. Coming out of the turn the in 4th Hall worked hard to hold off the inside Bexhill rower but the inshore water proved better leaving Hall finishing in 5th overall and 4th from CARA.
Cameron Mackintosh and Tom Stothart went head to head in neighbouring lanes in heat 1 of the Men’s Novice Sculls. The two rowers came close to making contact from the start, with Mackintosh opting to take evasive action to open space for Stothart. They found themselves towards the back of the field at the turn but fought each other on the return leg with Stothart taking 7th and Mackintosh in 8th. Hall and Stothart formed a new partnership in the Men’s Junior Pairs. A solid start saw the crew in the middle of the field in their heat coming out of the turn but they dropped to 7th at the finish.
The Ladies Double Sculls saw two Dover crews take to the water, Jo Johnston and Mary Newcombe / Maria West-Burrows and Megan Barter. West-Burrows and Barter got a excellent start with Johnston and Newcombe moving steadily through the field. By the turns Johnston and Newcombe had moved into 2nd place looking to hunt down the leading Shoreham crew. West-Burrows and Barter who started in the outside lanes turned in the middle of the pack whilst steadily working to the inside. With Dover’s leading crew unable to catch Shoreham leaving them in a comfortable 2nd place, West-Burrows and Barter held their own in the points battle taking 6th in the race and 5th in CARA.
Johnston and West-Burrows combined in the Ladies Senior Pairs. After a bad start, where Dover’s crew were behind the line as the racing commenced, the ladies worked hard to catch the field. The experienced rowers gradually improved their position reaching 7th in the overall leaving them 5th in the CARA points standings. Newcombe and Barter, another new pairing, performed well in their first race together. Their solid start allowed the Astor girls to remain competitive racing out of lane one. Working in harmony the inexperienced duo maintained contact with the leading crews to the turns where they were hit by another boat. Newcombe and Barter worked hard to find themselves amongst the points taking 6th place overall and 4th amongst CARA crews.
Johnston renewed her rivalry with Worthing’s unbeaten sculler in the Ladies Novice Sculls. The race followed the familiar pattern with the Worthing sculler establishing an early lead leaving Johnston in a fight for 2nd place. At the turn a Southampton sculler was neck and neck with Johnston and it was only in the last quarter that Johnston’s challenge fell away leaving her in 3rd overall and second in CARA.
The Open Double Sculls, which is only raced at Southsea, saw DGSB pairing of Hall and Stothart racing against the ladies crew of Johnston and West-Burrows. The boys crew got off to an strong start placing them in the leading crews whilst Johnston and West-Burrows quickly found themselves in a battle with the other ladies crews in the race. On the return leg Hall and Stothart were battling for 3rd eventually losing to the inside Bexhill crew but kept their focus in holding off the late charging Shoreham boat to secure 4th overall and 3rd amongst the CARA crews. Johnston and West-Burrows came in 10th securing the top position for a ladies crew.
Dover Rowing Club would like to thank Deal and Herne Bay Rowing Clubs for assistance in taking boats and equipment to Southsea.