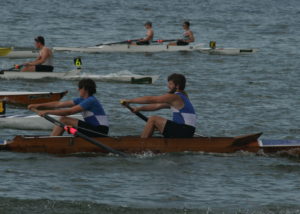 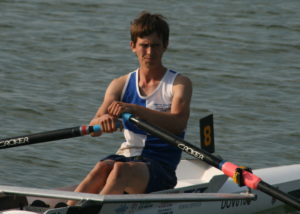 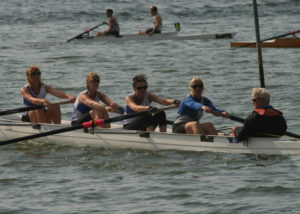 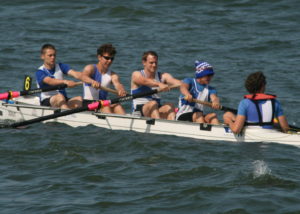 Dover Rowing Club were in action at Herne Bay at the weekend. The early conditions were far from ideal as the Junior Scullers took to the water. Dover was represented by Chris Hall, Chris Price and Robin McCorkell. The conditions took their toll with 3 capsizes and an abandonment but the Dover scullers coped well. Hall reached the buoy turn in joint 3rd with McCorkell and Price not far behind. Unfortunately Hall had to move to avoid kayaks that had entered the course to assist a capsized opponent leaving him in finishing 4th with McCorkell 6th and Price in 8th.
The Vet 40+ Fours race saw Chrissy Purvis, Maria West-Burrows, Tony Burrows, Jo Johnston with Saffron Walmsley-Preece at cox. The start saw Dover’s boat along with the two inside them having their bows bucked high and clear of the water by an unexpected wave. The experienced crew brushed off the difficult start and pursued the field but were a little behind at the turn and, try as they might, they could not progress into a points place finishing in 7th. Antonia Reed subbed into Herne Bay crews in both the Ladies J16 Quads and Novice Fours finishing 3rd and 7th respectively.
The Novice Men’s Sculls saw Tony Burrows, Tom Stothart, Cameron Mackintosh and Harry Platts entering the heats. With conditions still poor neither Burrows nor Stothart qualified from the 1st heat and, with Mackintosh narrowly missing a 4th place spot in heat 2, it fell to Platts to qualify in 3rd place. In the final Platts, who has only recently returned to rowing after his 1st year at UCL, put in an excellent performance from the outside lane and worked hard in the improved conditions to finish 4th.
The Men’s Novice Four saw Michael Scales, Stothart, Guy Hadfield, Mackintosh with Hall as cox. It was obvious from the start that Bexhill had two strong boats leaving Dover’s crew battling for 3rd at the turn chasing Worthing and holding off Eastbourne. Despite a hard push 4th was the best Dover could manage as Worthing held on.
Dover Junior Ladies Four were on the water next with Lizzie Foley, Purvis, Jen Jordan, West-Burrows with Johnson coxing. This crew combination had little practice in preparation for the event with West-Burrows in stroke for the first time. A brilliant start saw Dover’s ladies in contention on the outward leg turning in 3rd. They worked hard together down the return leg gaining clear water in securing 3rd.
The Men’s Junior Pair of McCorkell and Hall saw them in midfield in the first 200m before they moved steadily through the field and by the turn they were 2nd. The Dover boys moved wide to get a clearer run at the Shoreham crew whilst holding off the fast charging Bexhill crew on the inside. McCorkell and Hall were unable to catch Shoreham but were able to secure 2nd by a couple of lengths.
Ladies Doubles Sculls saw Dover enter two crews Johnston and Walmsley-Preece / West-Burrows and Reed. Johnston and Walmsley-Preece took an initial lead in their outside lane but were chased down by Shoreham by the turn. An unexpectedly strong performance from the Worthing double saw them push past the leading Dover crew leaving them to take 3rd. West-Burrows and Reed were unable to hold onto the last points place finishing in 7th.
The last race saw a new combination of Platts, Chris Husk, Hadfield, Hall coxed by Mackintosh entering the Men’s Junior Fours. The crew were left at the start as they were unable to hear the ‘go’. Driving hard they ate up the metres by the turn coming out 4th behind a Bexhill crew. Young Mackintosh then drove them forward drawing neck and neck with Bexhill with 500m to go. It remained tight to the line as Bexhill took it by less than a canvas with Dover in 4th.