Dover Rowing Club had 3 rowers qualify for World Offshore Championships after competing in the British Offshore finals at Saundersfoot beach, Wales. Jo Johston and Maria West-Burrows in the woman’s double and Tony Burrows rowing with Jon Osborn from Eastbourne RC. Both crews were using hired FISA style boats which differ from their normal CARA approved versions. 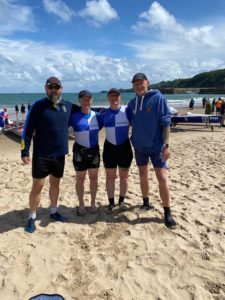 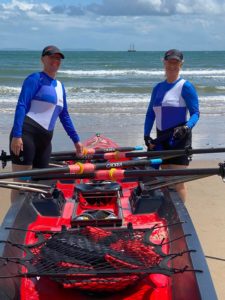 Burrows and Osborn had to go through qualifying. The 4 km race saw the Burrows boat grab second at the 1 km turn place. The Burrows crew were unable to close down the Mayflower crew on the 1.1 km second leg leaving them to settle into their qualifying place through the remaining buoys, finishing in 25 minutes and 5.9 seconds.

Finals day saw the weather in Wales deteriorate with 6ft swells, heavy hail storms and risk from thunderstorms. Burrows and Osborn were up first facing international opposition from former Swedish World Champion Peter Berg. From the start of the race there was a clear break for The Jersey / Rob Roy and Helsingborg crews who turned in first and second. Burrows boat turned in fourth behind the Mayflower crew. Running to the second buoy Mayflower had separation, whilst Burrows and Osborn had to focus on holding off the Hollowell crew who won the Welsh Championship earlier in the year. In the charge from the last buoy the Burrows boat finished in fourth in a time of 26 minutes and 15 seconds, only 4.1 second ahead of the Hollowell’s crew. With the Burrows boat ranked third amongst GB boats it guaranteed them a place in the World Offshore Finals.

Johnston and West-Burrows, veteran’s of 4 previous World Offshore Finals, would face worsening conditions for their race. The Dover crew got a fantastic start, even receiving praise on the British Rowing feed at the event. In the mix at the first turn the Dover crew fell behind the Irish Arklow and Coastal RA crews who would go on to be first and second. Fighting for third against Exmouth / Tideway and Jersey crews they started to drop back by the second turn, leaving them in a safe fifth place. Dover’s crew would complete the remaining turns to run home in fifth, securing automatic World Offshore places as the fourth GB crew, in a time of 32 minutes and 4.8 seconds