Following the tight finish to the virtual Atlantic crossing race, Dover Rowing Club were ready to take on Folkestone and Worthing on the next leg; the ‘sprint’ from virtual Antigua to virtual Panama covering 2115 kilometres. The event saw ergo (rowing machines), walking and running count directly to the kilometre totals with cycling counting half and workouts converted into distances to build towards the target. The interest in the first race led to more CARA teams joining the original three with Bexhill, Deal, Shoreham and Herne Bay as well as our friends from the west Dartmouth. With the larger membership clubs joining there was greater pressure on the Dover team to come together in their role of underdog. With permission from the race organisers, Dover also picked up the sole Eastbourne RC competitor and friend of the club Jon Osborn. 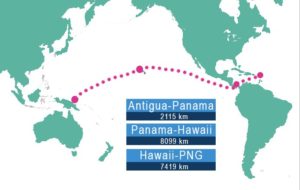 It was no surprise that Shoreham leapt out to an early lead on day one with their greater man and woman power, leaving Dover fighting initially with Folkestone and Worthing in the lower end of the table. Dover galvanised into action and steadily pulled away from their first leg opponents with big scores from Jo Johnston, Cameron Mackintosh, Matt Barnett and David Newman on the ergos; Chrissy Purvis, Heather and Bo Corby, Adrian Callard and Alfie Gardner on their bikes; Maria West-Burrows, Tony Burrows, Julie Hall on foot; Saffron Walmsley-Preece, Emma Oliver, Emma Spanton and Jon Cook on the workouts. Dover started closing ground on Deal and Bexhill. A midweek surge saw Deal take the lead with Shoreham and Bexhill above Dover. Big rides for Walmsley-Preece, Paul Scrivener and strong rows from Chris Hall and Tom Stothart drove the team on to close down Bexhill. With regular contributions from across the club including Nick Bailey, Steve Woods, Chris Price, Jen Jordan and Marie Cockerell. The youth section were also busy with Oliver Spanton, E Day, Chantel Mayes, Jasper Mallet and even the young coxswains Safia Corby and Scarlett Durnham-Burrows contributing to the race total. 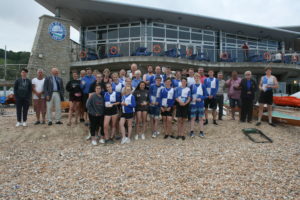 When Shoreham crossed the line after 6 days of racing followed shortly by Deal the official race stats showed Callard as the leading individual with Newman ranked 5th by kilometres covered. The start of the 7th day saw a big push from Dover with good distances from Callard, Kate and Ella Day, hard cycling from Barnett and a big ergos from Newman and C Hall. With everyone contributing important scores, Dover came home in third ahead of Bexhill.

The individual stats saw Barnett and C Hall enter the top ten for individual performers, but Callard retained his lead contributing a truly impressive 241.5 kilometres cross the 7 days. Dover were shown to have the third smallest squad but the highest average distance per rower across the competition. They led in the walking distance category and came 3rd in ergo and workout performances.

Dover now look to the next stage of the race finishing in virtual Hawaii, the longest leg at 8099 kilometres