Dover Rowing Club were in action in Herne Bay at the weekend competing in some very challenging conditions. Men’s Junior Pair of Chris Hall and Tom Stothart took a fantastic win despite pulling the rough water of an outside lane in the final. The Dover boys got a good start and worked their way towards the inside buoys for the turn, their efforts left them 5 lengths down on the inside home crew. The chase was on and they clawed back length after length to be neck and neck with 100m to go. It was all or nothing for Dover as they gave everything they had, taking the win by half a canvas. 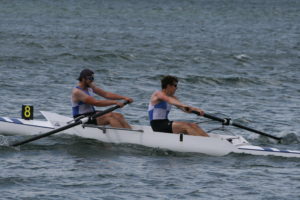 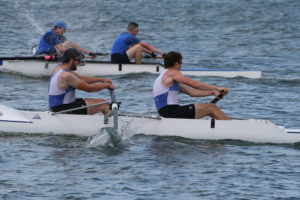 The Men’s Novice Fours of Cameron Mackintosh, Nathan Peach, Matt Barnett, Jon Cook coxed by Rebecca Stothart got a good start and were in an early lead before Worthing slowly overhauled them by the turn. The run home was frustrating as the crew that had won at Dover were unable to reel in their opponents, leaving them to finish 2nd. 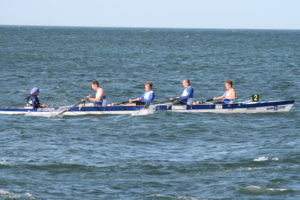 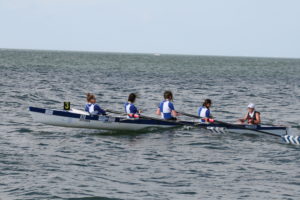 Dover entered three crews in the Ladies Novice Fours; the J16’s of Chantel Mayes, Emma Oliver, Emma Spanton, SJ Bamfield coxed by Jo Johnston; Rosie Thorp, Kate Day, Brogan Day, Kate Smith coxed by Tony Burrows; and a composite crew featuring Izzy Godden and Hannah Power. The J16 crew got the better of the conditions on the outward leg and turned in 2nd. They looked set to hold that position until 200m where the worst of the conditions threw the light weight youngsters around badly as the heavier adult Folkestone crew managed to row through them, leaving them to come home 3rd. The Thorp crew were not far behind in 4th with the composite crew coming in 5th. 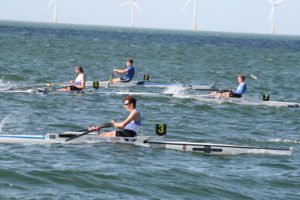 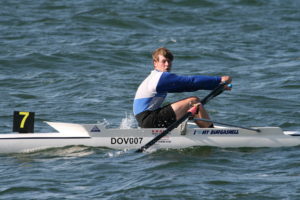 Men’s Junior Sculls heats went very well as Dover’s Hall, Peach and T Stothart all qualified for the final. An eventful final saw contact off the line between Hall and Peach as conditions made steering challenging. With the majority of the boats aiming for the two onside turns chaos ensued, Hall had to concede the better line and dropped to 8th, Peach and Stothart faired better exiting in 2nd and 5th respectively. Peach avoided trouble among the lead boats on the run home before coming under pressure from a late charging Bexhill sculler. Peach looked to have just enough to hold on before a heavy wave wrenched his blade out of his hand. He was able to save the boat and finished 3rd. Stothart in his first Junior status race came home 4th, with Hall in 5th.
J14 Quad Sculls crew Sebastian Steele, James Hale, Jasper Mallet, George Burrows coxed by Johnston came in 3rd after initially battling for 2nd with Worthing. J16 Quad Sculls saw Peach replace Burrows as the J14 rowed up an age group with Oliver at cox. The young crew did well in a straight drag race finishing 3rd. J16 Quad Sculls had a problematic race as a rigger problem left Oliver as a passenger with only Mayes, Spanton and Bamfield able to row, with Johnston coxing. Despite the obvious issue the crew finished 3rd. 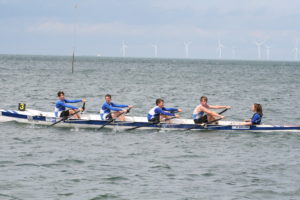 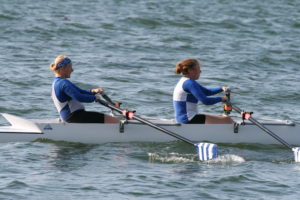 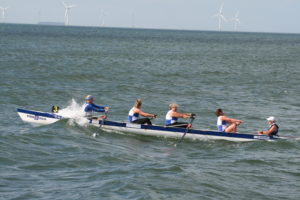 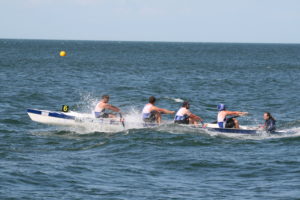 Ladies Junior Four had three Novice rowers K Day, B Day and Smith teaming up with West-Burrows. Conditions proved difficult with heavy waves crashing over West-Burrows in the bow seat leaving the crew to battle home in the last points position. The Men’s Junior / Senior race saw arguably the worst conditions of the day with inside crews getting pummeled in both directions. The Dover crew of Scrivener, T Stothart, Hall, Mackintosh coxed by R. Stothart had a exciting battle for 5th place with the home crew. With both boats swamped the home team prevailed leaving the Dover crew in 6th.
Johnston competed in the Ladies Open Sculls coming home in 6th and then went straight out with West-Burrows in the Senior Ladies Pairs coming home 7th. The Men’s Novice Sculls didn’t go to plan with both Mackintosh and Scrivener narrowly missing out on a qualifying spot in their heats. 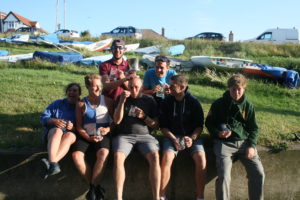