There were a series of firsts for Dover Rowers racing in the 3.5 km Adur Head at Shoreham. The first junior level win, river race, sculls race and coxing a racing crew. The racing was divided into two divisions; against the tide and with it. The time trial format saw all crews racing under 4 bridges to the finish near Shoreham’s Rowing Club, with the Coast Amateur Rowing Association and Spitfire rowing club competing. 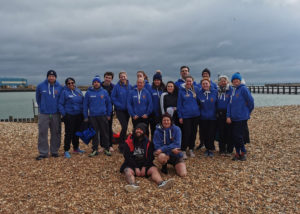 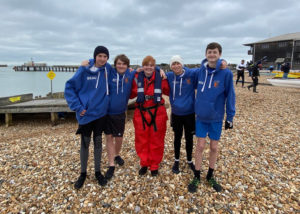 Tom Stothart had a storming race tracking down the second place finisher in the Junior Sculls shortly after the first bridge. Stothart pushed on to record the third fastest time across all crews at 13 mins 38 secs, taking his first win at Junior level.

Dover’s J14 Quad team raced against J16 crews in the older crews event. Josh Grassby, Ben Fagg, Bo Corby, Beau Everington-Nee coxed by Freya Emmerson fought hard to compete, racing down and passing Southsea who started 1 min 15 seconds ahead of them. The young crew would cross the line in a time of 18 mins 23 sec, finishing second to Shoreham.

The Junior Ladies 4 crew of Maria West-Burrows, Emmerson, Emma Spanton, Ella Day was coxed by 12 year old Sara Scrivens making her coxswain debut in a race. Starting third of the Junior Ladies 4 crews, Dover’s squad found the pursuit challenging and were unable to close down or catch the leading crews coming home in third place in 15 mins and 10 secs. 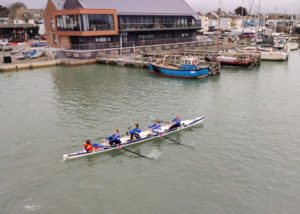 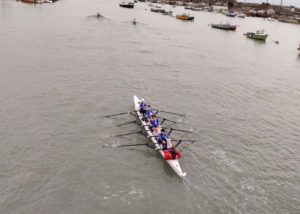 The Novice Men’s 4 crew of Kevin and Brendon Ulyatt, Jamie Smith, Eddie Briggs coxed by Stothart, found themselves in the sights of the other crews as they were the first to start. The role of Dover as fox, to Shoreham and Herne Bay’s hounds, saw the crew chased down in one of the closest races of the day. Pride drove the team to hold off the pursuit maintaining a 12 second gap as they would ultimately finish 3rd in a time of 18 min 55 secs.

The Ladies Novice 4 of Marie Cockerell, Canelle Ulyatt, Jodie Lott, Lorna Pile coxed by Jo Johnston, found themselves in the biggest field. With the strong Shoreham crew starting directly ahead of them, combined with the large time gap of the time trail, it was difficult for the crew to assess their relative position in the race. Lengthening the time gap to Worthing’s crew starting behind them, Dover found themselves gapped by the crews ahead. Despite finishing fourth overall their relative time to the second and third crews were not as big as their physical finish position had felt with Dover completing the course in 16 mins and 8 secs.

Krista Davis had the added challenge of sculling against the tide and experienced Dover Rower Johnston in her first Ladies Sculls race. Neither Dover racers could compete with the performance of the two Southsea scullers on the day. As the last two boats on the water in the first divison. both Johnston and Davis had to work hard finishing third and fourth in times of 21 mins 53 secs and 23 mins 55 secs respectively.