It was a tale of 2nd places for Dover Rowing Club at Herne Bay Regatta. Ladies J16 Quad Sculls crew of Rebecca Stothart, Morgan Evans, Ella Day, Jade Jordon coxed by Tony Burrows had a challenging race after Day caught a crab early shattering her blade shaft and trapping it under their boat. Despite the handicap the young crew fought on and held on to take 2nd place at the line. 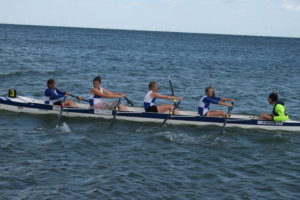 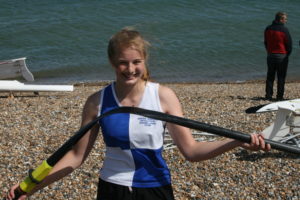 The Men’s Junior Pairs saw Chris Hall and Tom Stothart get off to a strong start in pursuit of the Herne Bay pair that has dominated the competition this season. They reached the turn with a narrow lead before coming out level, but Dover fell to 2nd by the last 500m and came home in the runners up spot. 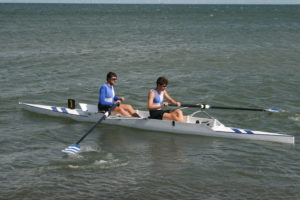 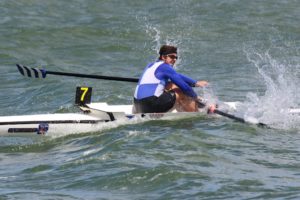 The Men’s Junior Sculls saw Hall and Chris Price competing. Hall in the less favoured outside lane got a great start and was in the mix with the lead scullers. Price had a steadier start in the rough conditions. Hall followed Herne Bay’s former World Champion around the inside turn, and applied pressure on him in the rough conditions in the final quarter, but was unable to pass taking 2nd. Price came home in 7th. The results of the Junior Pairs and Sculls were sufficient to take 2nd place in the Men’s Junior Aggregate competition. 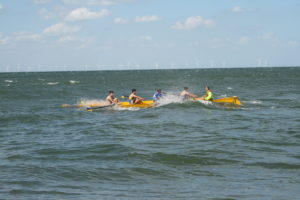 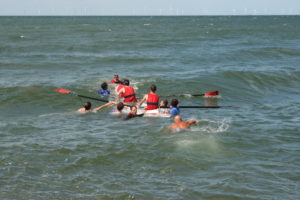 The Men’s Novice Fours saw Nathan Peach competing with an Eastbourne crew coxed by Paul Scrivener, and Jon Cook with a Worthing crew. Peach’s crew led into the turn but struggled to make a clean turn coming out 2nd with Cook’s crew 3rd. In the last 500m the conditions deteriorated but Peach’s crew cleared the worst of it and secured 2nd. Cook’s boat was swamped resulting in Dover rowers swimming out to help land the stricken boat and crew. 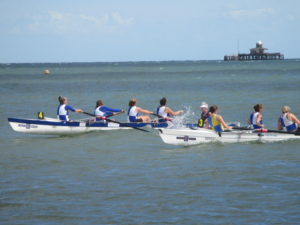 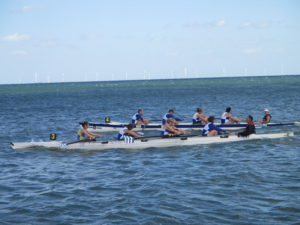 The Ladies Novice Four saw Dover enter two crews Dover A: Jade Jordon, R Stothart, Ella Day, Evans coxed by Jo Johnston and Dover B: Newton (Eastbourne) Jamie Jordon, Kate Day, Kate Smith coxed by Scrivener. There was extra interest in this race as Dover B contained two of the mothers of the young Dover A crew. The Dover crews were locked into a neck and neck race for 3rd and 4th with the ‘Mum’s’ crew taking it by a canvas.

Men’s Novice Sculls saw T Stothart, Burrows and Peach competing. Stothart got off to a great start moving with the lead group whilst Burrows and Peach were fighting for the remaining points. Stothart turned in 3rd and was unable to improve his position on the run home. Burrows and Peach just missed out the points coming across the line in 7th and 8th. 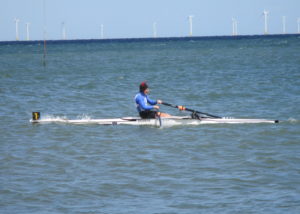 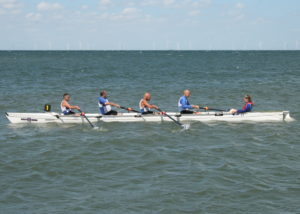 In the Ladies Sculls Johnston worked hard to run down the Worthing sculler finishing in 4th missing out on 3rd by less than a canvas. Johnston and Maria West-Burrows competed in the Senior Ladies Pairs but a slow start left them chasing the field and by the turn they were 5th. They were unable to improve their position by the finish line. 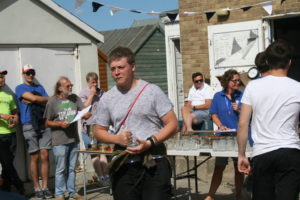 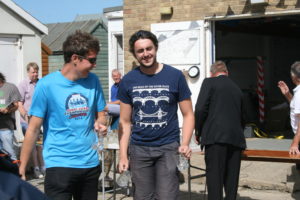